Do It Together Bio workshop # 3

A group of around 35 people arrived in De Waag Wednesday evening to make a urine battery and a DIY urine spectrograph. Designers couple Mike Thompson and Susana Camara-Leret designed a hands-on experience to make and discuss the possibility of using urine – as they have done before – as a medium for self-diagnosis. Together with the Netherlands Metabolomics Centre (NMC) and the Sino Dutch Centre, Mike and Susana researched the aesthetics of representation of both the levels of metabolites and the symptom combinations found in urine according to traditional Chinese medicine. 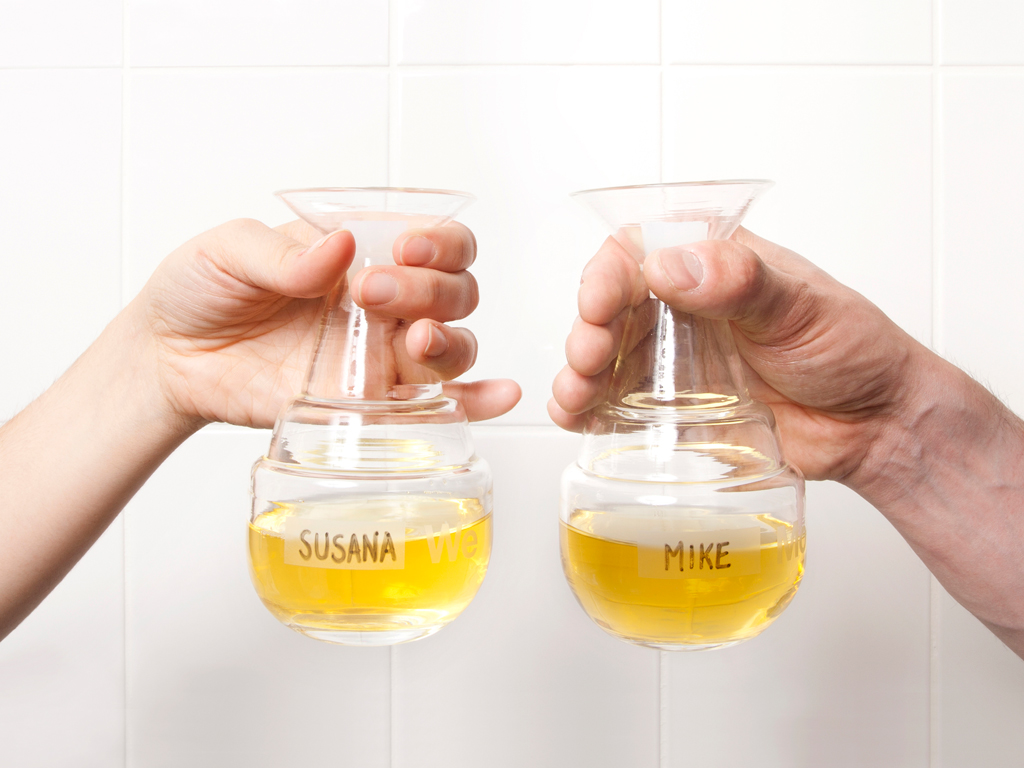 Before dinner the lot of us donated some urine in a jar. After dinner we did the same - hoping to be able to see some metabolic differences after consuming acidic dishes and drinks. So we had quite a quantity to make the battery, using copper and zinc as cathode and anode. Connecting different batteries brought us no real extra voltage though; so some more tinkering was needed to get it to power the diagnostic device that aimed to use the same liquid. The making of the spectrograph, using a webcam and transparent plastic in a black box showed differences in urine before and after the dinner.

Now why are we doing this?

Scientist Herman van Wietmarschen of the NMC explained the 160+ different metabolites found in urine, showing mainly a series of – for us mortals – incomprehensible graphs, that even become more so when combined with symptom constellations of Chinese traditional medicine. Some critical comments came from the group, questioning the validity of a western medical science working with a Chinese interpretation of metabolic data. Relating Herman’s presentation to the not yet working diagnostic device, it soon became apparent we were designing meaning, designing representation.

In his project ‘Measuring less to feel more’ designer Mickael Boulay studied the use of the glucose meter, a device more and more people use at home. In his discursive presentation he raised the issue of the design of such meters. Interestingly, no one repeated the earlier critical comment about Chinese - everyone seemed positive about differentiating the way to represent diagnostic data by such devices, for the understanding, demands and emotions of its users.

We can access more and more data that tell us about our physical condition. Increasingly, people are expected to take responsibility for their own health and monitor – for example – their chronic disease. The question is what quantity (and what quality) of information will actually lead to personal empowerment.

So more than a workshop that tries to do what science does better, Do It Together Bio is a series of workshops that stand for experiencing by making. The next Do It Together Bio workshop will take place on March 20th: “Making and making sense of the DIY Bio Printer”. You are invited to build a bio printer with us, but more than that: figuring out what we print with it.

Tags
do it together bio
artist in residence
artistic research