Alice Vandeleur-Boorer and Tereza Valentova experimented in our Open Wetlab for three weeks. They were looking for a method to make cheese with their own bacteria. To follow are their experiences:

"This summer we brought our project to Waag's Open Wetlab for three weeks. Previously we had been developing our ideas in a domestic kitchen space on a wild fermentation project. As the nature or our processes are hazardous not only to human health but also to ones appetite, we decided to instead engage with the laboratory environment.

Having already visited and worked another labs in university and commercial settings to develop 'Vaghurt', we discovered that Waag has a refreshing attitude towards experimental projects where as most other labs we were limited in their support for our work.

Vaghurt is an exercise we have been developing as part of a wider investigation, overlapping conceptual and relational spectrums of food, fetish and human ecology. By fermenting milk with wild lactobacillus samples found in our vaginas we have been creating milk fermentations to variable degrees of edibility, toxicity and flavour.

Working at the Open Wetlab offered us the opportunity to extend our networks and ideas. We were attracted to the space through interests of collaborating with the wet lab and the hackspace to develop Vaghurt. We aimed to design and make some visual wearable objects and also move to using microbiological processes. By employing the process of bacterial isolation methods (diluting and streaking using selective MRS agars and broths) we were hoping to refine a vaginal culture of pure lactobacillus strains rather than the varied wild cultures. The processes learnt at the Open Wetlab will then be used for making edible Vaghurt products in different places and with different hosts.

Whilst working we came to realise that before any major development in our human cultures could begin we needed to write a practical protocol that any lab could receive, re-assuring the reduced risk of infection from potential pathogens related to our vaginal smearing.

We decided to write the protocol by going through the isolation process using safe cultures in food products of yoghurt and pro-biotic drinks (Yakult). The writing of the protocol became an important exercise in exposing the gaps in our knowledge. We spent a large proportion of the stay training in sterile practices and learning how to use the tools and equipment effectively to reduce the risk of contamination.

Whilst doing this we also began designing a DIY MRS broth to replace the expensive manufactured versions and spent time reading and studying generalised life sciences. The hackpace was in a valuable proximity to the Wetlab as we were able to begin working on new visual and 3D ideas for possible exhibitions.

Although the time spend here was busy and extremely fruitful, we have only scratched the surface of our intentions and wish to continue working at the Open Wetlab to complete an isolation protocol, DIY MRS medium, clothing items and finally produce an edible fermentation with a refined mother culture.

For the next stage of our investigations we will continue working on a new product “cunt juice” based on synthesizing vaginal fluid with pro-biotic supplements. This exercise will span aspects of ancient sex spirituality and the commercialisation and marketing of food fetish relationships. The research is likely to expand further experimentation with synthesizing other bodily fluids.

Taking residence at Waag expanded our ideas and microbial knowledge giving us far greater potential for effective food hacking. The networks of members, visitors, staff and interns were of huge benefit. On entering this environment we were supported and nourished from the beginning and was given the freedom necessary to develop obscure ideas and learn from our mistakes. Although working in the domestic kitchen was an incredibly important beginning for a DIY and site-specific approach, we were hugely inspired by the lab environment and contemporary visions of bio art and bio hacking." 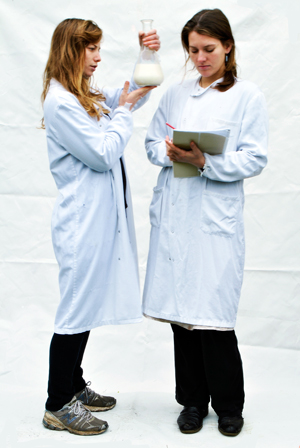 Tags
do it together bio
experiment