It’s been a month full of travelling and meeting new people, for the Creative Learning Lab. After our visit to FabLearn in Denmark, we were invited to FABelgrade in Serbia. FABelgrade is the first FabLab conference in Serbia, organised by the people of FabInitiative, Polyhedra and Fablab Belgrade. Karien Vermeulen and Robin van Westen hosted a workshop for a group of teachers and presented the work we do in maker education in the Netherlands. Nicolo Merendino held a presentation/workshop about biohacking for other makers from the Balkan region. But the conference was actually much broader than maker education or biohacking.

A large array of inspiring speakers took the stage, from people who are designing a 3D printer that can replicate itself (RepRap, by Adrian Bowyer, since 2005!), to architects that created new machines for their design challenges (Reed Kram of KramWeisshaar). We had the chance of getting in touch with other Labs who operates in a very different context than ours. This was a very interesting opportunity to interact and talk about possible future collaborations and developments of the Fablab movement in Europe. In general, the two-day conference was an inspiring mix of artists, technology designers, scientists, educators and coders who use Fablabs for their work. Impossible to summarize in one short blog. For now, we wish to highlight a few of these people.

Ivana Gadjanski & Nevena Popovic of FabInitiative
The two founders of FabInitiative, which is aimed at starting Fablabs in Serbia and promoting STEAM education (science, technology, engineering, arts, and mathematics), especially for girls, in the region. They came up with the idea of FABelgrade two years ago, and have since then worked hard to involve many partners (The US embassy is the patron of the conference), to create this diverse program and to attract a large audience. We are hugely impressed by their energy and drive to spread the maker movement in Serbia.

Memet Unsal of InnoCampus
Memet presented his work in Turkey with the Innocampus project, which is a Fablab and coworking space that is located in three shipping containers. These containers travel to universities all over the country, to run a three-month program in which they support young entrepreneurs in the area. With access to FabLab machinery, but also extensive training in the field of design, technical skills and entrepreneurship, these young people get to kickstart their ideas and innovations. Innocampus aims to start up a permanent FabLab in every region they visit, to guarantee long term results.

Greg Gage of Backyard Brains
Backyard Brains is a Detroit based organisation that develops educational tools, with a high DIY feel, that teach kids about neuro-technology. With Arduino based kits that are accompanied by experiments, neuro-technology becomes very interesting and a lot of fun. During FABelgrade, Greg gave a science show in which he performed the cockroach test, that demonstrates how electricity flows from the brain to the muscles. But most impressive for the audience was the human to human interface, where one person could control another persons muscles. A very inspirational example of how you can translate high tech, scientific knowledge to a broad audience.

Luka Mustafa of GoodEnoughCNC
Luka is a PHD student at London University College, who in his spare time builds open hardware. His most significant project is Koruza, which is a system that could provide an alternative to wifi networks in the short distance transmission of information, by using a laser beam. But besides that, Luka and his colleagues have developed a range of open source machines that can be built with a few high tech compartments and many low costs materials. They started from the idea that a lot of machines don’t need many fancy features to do what they’re meant to do. They need to be sturdy, relatively cheap, and ‘good enough’ for the job that you have. So that’s what they created. Check out goodenoughcnc.eu to see what they came up with.

Plans for future collaborations between Waag and FabInitiative were already in the making, and this conference fuels us to make our ideas concrete and reach out to more interesting partners in the Balkan region. We look forward to it! 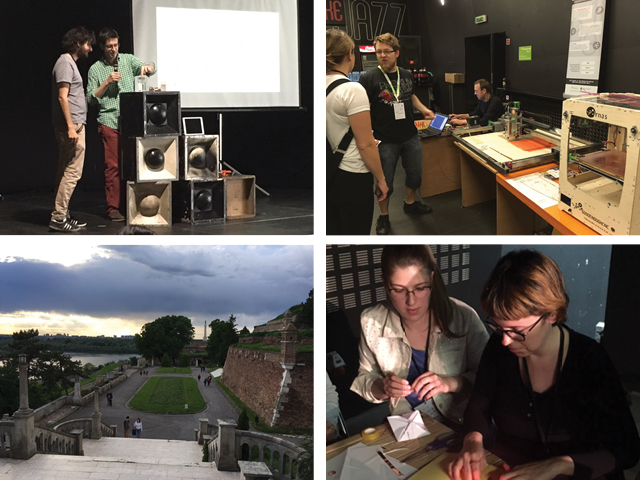