To be honest, I had not heard of it before, but 14 November (last Thursday) was actually World Usability Day. The event, also nicknamed as 'Make Things Easier Day', already exists since 2005. One of its messages: "Human error is a misnomer - we don’t have to put up with products and services that don’t work well".

The reason why I (finally) discovered World Usability Day a few weeks ago was thanks to the topic of this year's edition: 'Healthcare: Collaborating for Better Systems'.

So last Thursday, there were 77 events organized worldwide, (almost) simultaneously. 35 of them took place in Europe, one in The Netherlands. The Dutch event was organized by CLICK NL, the Dutch Creative Industries knowledge and innovation network. Lectures in the morning, and a hands-on workshop in the afternoon, with a focus on a very crucial part of the title: 'collaborating'.

Workshop 1 : The multi-level design model (by Peter Joore, NHL)
And what does it do? Well, at the moment the model works more like a visualizing tool. But its way of classifying the different levels and cutting them into four distinct parts (reflection, analysis, synthesis and implementation/experience) helps the different actors of a project to visualize the short term and longer term impact/consequence of their product or service. For me, I see it also as a way to map and to become aware of what’s above the product/service I am working on, especially for the healthcare related projects I am involved in, like the COMMIT/Touch project. A current EU regulation? Who potentially has an interest to invest in such product/service? etc.

Workshop 2 : 'Innovation on the rail' (by Marc Steen, TNO)
Imagine a game that could be at the crossroads between Lego, Poker and Monopoly. I’ll try to recall how the game ran: 30 minutes and six participants collaborating to build a train following a given model (=metaphor for a collaboration project). Every round was a meeting where we would agree who would invest knowledge (=Lego blocks) to achieve our collaboration. (See the picture on top).

Aside of this common goal (collaborating to complete the train), every participant (representing one company/collaborator) had a personal mission. For instance, one participant was ‘secretly’ developing a new technology for the train (a special kind of Lego block) and would gain a financial bonus if the new technology were used in the final train. Others would gain a financial bonus if the train was completed within 30 minutes, so they would push the collaboration forward to achieve the common goal as fast as possible. Another one represented the current (and soon old!) train company who would be jobless if we managed to complete the new train: his interest was to slow down or, if possible, avoid completing the train in 30 minutes, an by doing so he would earn a financial bonus.

Did we manage to build the train? Yes, we did! It looked easy, but the organizers of the game revealed to us that the accomplishment of the train depends on the kind of people playing. It seems that academic people have a tendency to exceed the time limit, as they would spend more than half of the time discussing their plan of action... 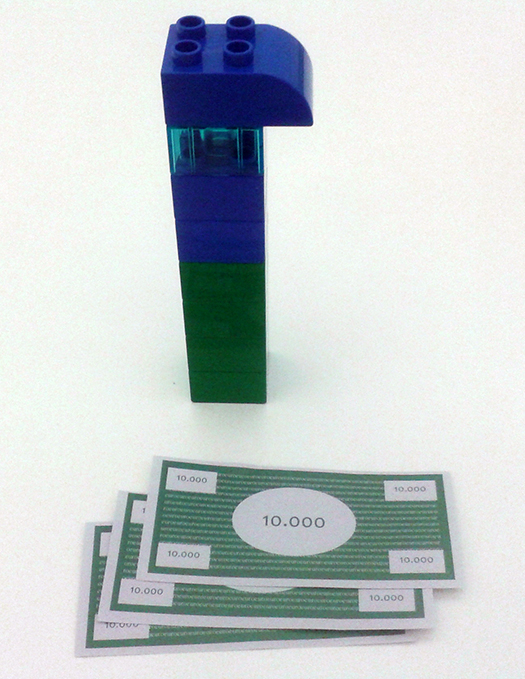 Another insight brought forward by our group of participants was how to evaluate the success (or not). As the train is built and the common goal reached, this can be marked a success. But looking at a personal level, the only way to quantify it is monetary: did you manage your personal mission and did you get the financial bonus?

We thought that there should also be a way to evaluate the ethical side of your success: was the strategy used ‘politically correct’ towards your collaborators? Would they collaborate again with you in the future? In that way, we think the game could become even more subtle and could really play the role of a mini-simulation, in order to understand the different interests one can have while collaborating.