During the first public meet-up on Thursday 28 April, the Tactical Media Room (TMR) explored the landscape of disinformation and how to navigate in it. The Tactical Media Room is an initiative that was founded in late February 2022 by Waag Futurelab and the Institute for Network Cultures (HvA) after the Russian invasion in Ukraine.

In collaboration with hackers, artists, designers and researchers in the Netherlands, Tactical Media Room (TMR) aims to support independent tactical media, journalists, newsrooms and civic initiatives from Ukraine, Russia, and Belarus. Find out more about the first meet-up on disinformation and how to navigate in it, and register for the second meet-up. On Thursday June 2, we will screen Ukrainian video art in times of war.

The evening starts with a cup of delicious borstj soup made by designer Roel Wouters and Jasper van den Berg. After a word of welcome by Marleen Stikker, Wouters presents Mirror Kitchen Lviv – Amsterdam. In this project, Wouters and his colleagues cook the recipes they receive from an activist artist group in Lviv. The dinner in Lviv is mirrored to the one at NDSM werf. Mirror Kitchen creates a powerful sense of being together, even though the Netherlands might seem far away from Ukraine. All donations for the food in Amsterdam straightly go to the activist artist group in Lviv.

After the soup, the Talk ‘How to act?!’ is next up. Viktoria Doval (Ukraine), Ilya Shcharbitski (Belarus) and Alexander Gubsky (Russia) are invited as representants for their countries, in order for us to get a fuller scope on how disinformation works. The talk is moderated by Kristina Petrasova, who is a cultural programmer and activist. 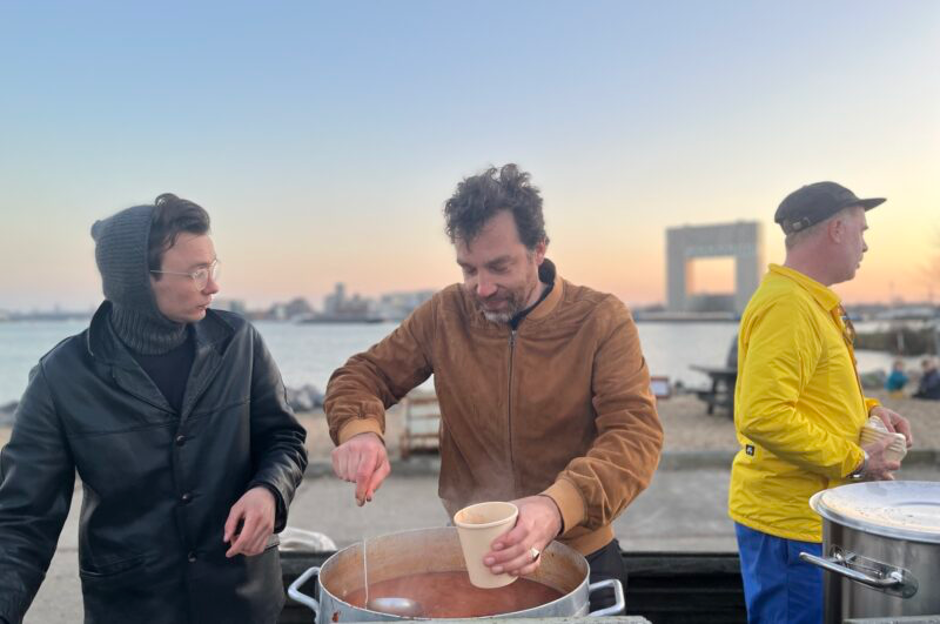 Alexander Gubsky, publisher of The Moscow Times since 2021, had to relocate from Russia after the war started. Anyone in Russia who is working as a journalist or is critically writing about Putin or the war, risks fifteen years of imprisonment.

Gubsky shows us a video to exemplify what propaganda can look like. In the video, the cameraman is walking in front of some soldiers who are on the lookout for bombs. This clearly shows that the action is staged, because a cameraman wouldn’t walk on a spot where soldiers still need to check for bombs.

The publisher describes the war as a tragedy for both Ukrainians and Russians, since a lot of Russians have friends and partners in Ukraine and vice versa. He also feels that it is becoming dangerous for Russian people to go abroad, because they’re hated so much. He stresses that we need to make sure that Europe hates Putin, not the Russians.

Ilya Shcharbitski, a civil activist and spokesperson for the Belarusian opposition movement in The Netherlands, then shares a few different modes of Belarusian propaganda with the audience. Shcharbitski has strong reasons to think that president Lukaschenko actually doesn’t want to partake in the war between Russia and Ukraine. Not in the last place, because a war is very expensive. However, the Belarusian state media is already pushing for it, probably forced by Putin’s propaganda infiltration. Ilya is curious what’ll happen. Currently, if you’re working in media in Belarus and are not exactly publishing what the state asks for, you are at risk of eight to ten years in prison.

Unfortunately, Viktoria Doval, analyst in the Ukrainian office of Argus Media, couldn’t make it tonight. Moderator Kristrina therefore reads a statement written by Doval. Until March, Doval lived in Kyiv before the war caused her to fled to Amsterdam with her daughter and mother.

Doval notices how people tend to believe the first thing they hear. The form of propaganda is that it always conveys a simple message. It hits quick and fast, like sugar: who is the enemy and who is the friend? According to Doval, the only way to fight propaganda and disinformation, is by educating the people. Knowledge is power. The constant learning of how media and propaganda works, is a permanent learning process for everyone.

Doval’s statement forms a nice bridge towards the talk of Ellen Rutten, Professor of Literature at the University of Amsterdam (UvA). Europe is in crisis, she begins, and in response we need a new educational institution to train critical scholars. A cooperation that unites academic and other professional voices such as artists and journalists.

There are already a lot of initiatives but it’s the sheer number of people at risk that asks for a new one. That’s why in June 2021, a group of scholars and writers such as Polish Nobel Prize Winner of Literature Olga Tokarczuk wrote an open letter to the European Commission, stating that we need a new Eastern European university. The group believes that education can function as a way to debunk disinformation.

This was the beginning of the University of New Europe (UNE). The institution also aims to help scholars from Ukraine firstly, and secondly, to also help Russian and Belarusian scholars. Sixty percent of the work places that the institute offers are reserved for scholars, students and or contributors at risk.

While UNE is still in the making, neweurope.university is a spin-off programme in which scholars at risk are connected to professionals. UNE acts as a matchmaker between mentors and mentees who are at risk. Mentors are asked to schedule a few online meetings to help and think of the best scenario for the mentee. The programme is still looking for mentors with relevant networks, so if you’re interested, register via the link! You don’t necessarily need to be a scientist to become a mentor.

Boris Noordenbos, Associate Professor of Literary & Cultural Analysis (UvA), takes us on a journey into how history, conspiracy thinking and propaganda are deeply intertwined in Russia. According to Noordenbos, one of the key pillars of Russian propaganda is the conspiratorial outlook of how things work in Europe.

Noordenbos’ definition of conspiracy theories is a belief that everything is connected; that there are no accidents and everything happens for a purpose. Furthermore, everything isn’t as it seems to be. The important decisions are made off-stage, behind the curtains where we can’t see them. Like for example, Bill Gates off-stage deciding to unleash the coronavirus upon humanity.

An important aspect of conspiracy theories is the notion of reversal. You would think that Russia is attacking Ukraine, but actually it’s the other way around. Substitution is another outing of conspiracy in propaganda. Take, for example, the historical substitution in Russian propaganda that routinely represents Ukrainians as fascists and Nazis. In this rhetoric, Russia is fighting the historical, archetypical, mythologized figure of the Nazi. The Nazi figure replaces the actual Ukrainians in the present.

Conspiracy propaganda wants to make you believe that under the surface of the 21st Century, we’re actually fighting the Nazis from the forties. And the fact that you can’t precisely pinpoint a Ukrainian Nazi is exactly the proof that he exists: they are good in hiding it. Here, the reversal is combined with the historical substitution.

So how to debunk disinformation? Noordenbos doesn’t have a straightforward solution. It makes is extremely difficult to debunk information when Russian propaganda is representing itself as factchecking and thorough journalism as well.

Someone from the audience suggests to start debunking case by case, step by step. But that is exactly what is done on the other side as well, is Noordenbos’ reaction. Repeating another message step by step isn’t necessarily the solution.

The round of questions is finished by Ellen, who remarks that propaganda is rarely funny. Maybe humor could be a tool in encountering propaganda?

A collective platform for Ukraine

Finally, Michael del Pino presents his initiative: inzamelplekkenoekraine.nl. He saw a problem arising when people started to collect goods for Ukraine. This quickly became a logistical mess, leading to warehouses left full of unused blankets and clothes. Del Pino went to Freedom Internet and met a lot of enthusiastic people who helped him to create the platform inzamelplekkenoekraine.nl, where you can easily find what goods you can donate to whom in your neighborhood. Unfortunately, the ongoing war makes a space like inzamelplekkenoekraine.nl still necessary.

After exploring the disinformation landscape, it becomes clear that a single solution to support independent media and journalists or to debunk disinformation isn’t available yet. The urgency and importance of the war however are real, and there is a strong desire in the group to keep on organizing meetings, to form alliances, to debunk disinformation and organize support for Ukraine and citizens from surrounding countries that are hit by the war.

Would you like to educate yourself, to act and discuss? Join the next Tactical Media Room meet-up at Waag! TMR is proud to host a solidarity screening in collaboration with the Emergency Support Initiative by Kyiv Biennial and HomeCinema to raise funds for Ukraine.