Louise Whiteley, June 20th 2014
Talk for opening of ‘The Romantic Disease’ at the Waag

Good evening, I’m Louise Whiteley, and I’m an associate professor in science communication at Medical Museion at the University of Copenhagen in Denmark. Medical Museion is a combined medical museum and academic research group, and like the Waag and like the work of Anna Dumitriu, we aim to bring together the past, present, and future of medical science, and also to bring together scientists and doctors with artists, curators, humanities researchers, and of course, public audiences.

As The Romantic Disease shows, bringing different eras together helps to reveal unexpected connections, confront alternative histories, show how our present perspectives could have been otherwise, and also to raise new possibilities for the future.

The Romantic Disease also shows how bringing together different disciplines can reveal a richer picture of how medicine and medical research works, what it means to us, and how its scientific, cultural, and historical contexts are tangled together.

Of course, people coming from different fields have different goals and different ways of thinking about knowledge, and are often in competition for resources or attention. But if we stop aiming to persuade each other that our goals are the right ones, and instead try to better understand each other, we might not only avoid misunderstanding and discover new ways of looking at the world, but also find places of intersection where we can create knowledge together.

This all sounds very nice and utopian – ‘let’s all play together nicely’ – but as anyone who has tried working across disciplinary boundaries will know, it can be very tricky in practice. It requires hard work, creativity, openness, and of course great communication skills. Anna Dumitriu’s work gives us concrete examples of what this can look like when it works.

I first met Anna in Leiden last year, at a Lorentz workshop on the future of art & science collaborations. And I’m here this week for another Lorentz workshop about public engagement in medical museums, where we’re trying to generate more possibilities for work such as Anna’s to take place in our institutions. So I’m delighted to have been invited to introduce The Romantic Disease and offer some reflections on it.

In my short talk this evening, I want to highlight just a few of the ways that The Romantic Disease helps us understand mankind’s strange relationship with tuberculosis, whilst also shedding light on the relationship between artistic, cultural, and scientific ways of investigating and understanding health and sickness.

Before I do so, I will set the scene by briefly introducing tuberculosis or TB – much of which I’ve learnt from Anna’s writings and the exhibition texts. 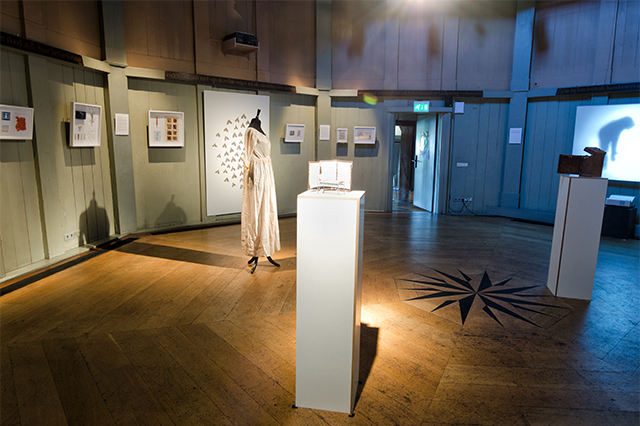 Tuberculosis
Tuberculosis has been found dating back to the Neolithic era, was identified by Hippocrates in 460 BC as the most widespread disease of the times, and still affects a third of the world’s population today.

TB has also been the subject of many myths and superstitions, with vampires, demon dogs, and bad air all being past candidates for its transmission. And TB has for a long time been strongly linked to art, literature, and music – as a review of The Romantic Disease in The Lancet argues, TBs ‘hold on human creativity seems as tenacious as its persistent and devastating grip on global health.’ This connection was particularly strong during the Romantic Movement; the disease dancing along a knife edge of fear of infection vs. mysterious appeal, as famously expressed by Lord Byron:

“How pale I look! – I should like, I think, to die of a consumption... because then the women would all say, ‘see that poor Byron – how interesting he looks in dying!’”

Robert Koch discovered the bacterium in 1882, but this scientific breakthrough still didn’t solve the problem of how TB spreads. Today we know it is spread mainly by coughing, as the droplets of moisture in coughs are the right size to be absorbed by someone else breathing them in – unlike the dust that was blamed in the early 20th century. Recent whole genome sequencing has helped identify how TB spreads in particular communities by tracking tiny changes in the genes of tuberculosis bacteria as they pass from patient to patient. But even though we might feel ourselves to be a long way from vampires and demon dogs, there is still much to discover about how TB spreads, how to contain outbreaks, and how to create antibiotics for increasingly resistant strains.

What this shockingly brief history hopefully demonstrates is that diseases like tuberculosis live not just in the body of those infected, or in petri dishes in the lab, but also in our cultural imaginations, in patterns of poverty and international migration, in the way that treatments shape a patient’s life, and as players in the broader struggle to understand the still largely unmapped jungle of invisible microbes that surround, cover, and live within us – both threatening our health and essential to life.

The artworks and scientific residencies
Anna’s artworks insist upon this patchwork of meanings, reminding us that no one perspective on disease ever has the full story and reminding us that just as the knowledge of the past looks unfounded or downright superstitious today, the knowledge of the present is unlikely to be complete. For example, the pneumothorax machine in one of the works was used to collapse lungs in the mid-­‐20th century, based on the belief that this ‘rest’ would allow lungs to heal and deprive the tuberculosis baccilus of oxygen. This was an extreme drug resistant TB – and is also a treatment that has caught the imagination of authors and artists for its metaphorical as well as gritty physiological aspects.

As well as threading together past, present, and future, the artworks use ‘mixed media’ in surprising ways. Antique fabrics such as maternity dresses and hospital bed spreads are impregnated with killed tuberculosis bacteria and with traditional plant-­based dyes used as TB treatments since ancient times. Historical medical objects such as sputum cups and pneumothorax machines are impregnated not with bacteria, but with engravings of the textures of lung tissue, diagnostic tests, and genomic transmission networks. With an elegantly anachronistic force, these tracings of contemporary scientific knowledge across the material memory of past treatments provoke, for me, both empathy and humility. And a backdrop of collages displaying newspaper articles, patient photos, public health campaigns, and dubious advertisements reveals the places where fragile scientific knowledge has knitted together with cultural superstitions – and also ensure that we remember the human experiences woven throughout this complex fabric.

From this list of materials, you might well be wondering where one finds tuberculosis bacteria, let alone makes them safe to work with? Anna has been collaborating with microbiologists for many years, and has been artist in residence at Public Health England tuberculosis research centres, in collaboration with the UK Clinical Research Consortium: Modernising Medical Microbiology, and other research groups, clinicians, and medical research charities. She has shadowed researchers and clinicians, but also learnt the tools of their trade – in a process of building knowledge and trust that allows her to access the materials that bring such potency to her work.

Art, science and public engagement
I want to conclude by coming back to where I started, situating The Romantic Disease in relation to art-­‐science collaborations and their role in public engagement with science. As many of you here know, there has been a recent surge of popularity in art-­science collaborations – and often passionate debate about what kind of art is produced, whether science benefits too, and whether art-­‐science can help ‘improve’ relations between science and society.

Like many so-called ‘recent trends’, art, science and its communicative role has old and venerable roots. A reproduction of one of Rembrandt’s anatomy lesson paintings is situated in the room next to the exhibition and illustrates the communication of science through art, although in contrast to Anna’s impressive knowledge of microbiology, Rembrandt made some major anatomical mistakes!

Today art is still used to communicate science, to help visualize, simplify, explain, or contextualise. This communication is sometimes aimed at improving public knowledge or sometimes art -­‐science is instead critical of science and its links to political and economic institutions, and sometimes it aims to simply open up controversial debates about, for instance, how research priorities are determined or how ethical limits are set. As for any subject, art about science can take many attitudes to its subject. But regardless of its attitude to science, art such as Anna’s that itself uses scientific techniques can help reveal the processes of research; the nitty gritty of how science actually functions; which is arguably necessary for any kind of deep engagement.

One question which still produces much hand‐wringing is whether science is actually changed by collaboration with artists? There are some examples of new scientific discoveries arising from art collaborations, and innovative ideas coming from DIY or citizen science practices that blur creative and scientific approaches. But I would argue that as well as asking how much further this could be pushed, we should also focus on less direct, but no less important, ways in which science and scientists are ‘changed’.

As Lynn Stevens, Fundraising & Communications Manager at Target TB writes:
“It’s been amazing working with Anna – as we tell stories about TB myths and beliefs gathered from our front line work in say Uganda, or Timor Leste, you can see on her face as she listens that she is already making connections, bringing quite disparate things together to shape her artistic response. The result makes us see the disease in a new way, it’s been fascinating”.

This description of seeing things anew brings us back to the argument that TB lives in many places; art-science collaboration we may not always create new findings in the petri dish, but at the intersection of the dish, the body, the canvas, and culture. And seeing in new ways – like blue sky scientific research – can have indirect and unexpected effects down the line.

The exhibition is described as ‘an artistic investigation into mankind’s strange relationship with the so-called ‘Romantic Disease’’. But this exploration of relationships across different eras and ways of knowing goes beyond just pointing out the ‘strangeness’ of old myths and superstitions, beyond just listing different perspectives on TB, and beyond just placing different materials alongside each other. Anna brings both materials and ways of knowing into conversation; conversations whose strange juxtapositions are nonetheless somehow familiar – perhaps because they reveal relationships that were there all along, but which we usually ignore. Relationships between the invisible bacterial world and our macro world of bodies and illness; but also relationships between cultural, artistic, and scientific ways of knowing.