‘A million people working for nothing, you better give them what they really own,’ sang John Lennon in Power to the people (1971). Apart from the context in which this composition was created, you could say that this sentence has hardly lost any of it's strenght in those forty two years.

You can tell by looking at the program of the first day (17 September 2013) of the Amsterdam Urban Innovation Week, that carries the title of this song as it's theme of the day. The times have changed, the circumstances are uncomparable, and yet the call to act is more urgent then ever.

To act is something that comes natural to Egbert Fransen of Cultuurfabriek – together with Waag the driving force behind the event. “We are not going to sit and wait for others. We are going to do it ourselves!”, he states. After which he proudly presents the magazine Nieuw Amsterdam. 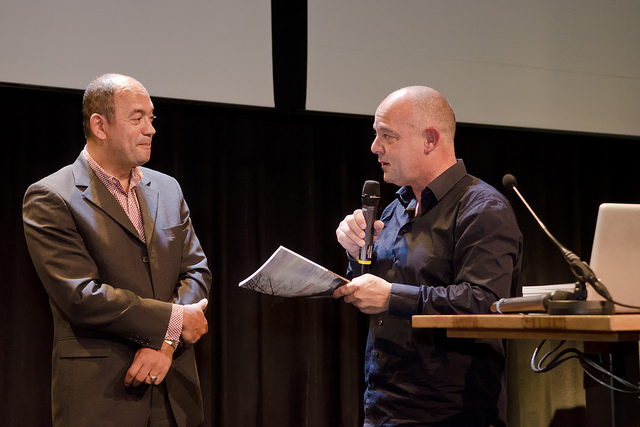 “We will have to,” is the statement by Albert Jan Kruiter of the Instituut voor Publieke Waarden (Institute for Public Values) later. He concludes “that in a democracy, the government has a tendency to protect her citizens, while the latter become more and more individualistic.”

At a certain point this situation can become untenable. One can see this clearly by looking at our welfare state. It was expanded continuously, but became impossibly dear in the end. The central government then transferred a large portion of her responsibilities to local authorities.

By doing so, the government admitted their shortcomings and acknowledged that market competition that was introduced in the eighties of the last century had failed, and consequently brought power closer to the citizens. The citizens now finally have the chance to let the government and the market work for them.

According to Steve Clare of the British initiative Locality this is “the challenge that we modern people are facing. The social contract has been thorn up. People will have to get organized and be led by enthusiasm and ambition. Because the knowledge is present within the community.”

Keren Nazareth, of the organisation Saath, shows that it is possible. Since 1989, this foundation is working in the slums of India to provide these with the essential basics. It also tries to convince citizens, government and businesses of the emergency of these much needed facilities.

“But we can only succeed if the inhabitants themselves are willing to make the first step and want to cooperate", tells Nazareth. “By putting time and energy in the project - and by playing it well - other parties will in the end also join.” Speaking about power to the people!

Michiel Jansen-Dings is guest blogger for the Amsterdam Urban Innovation Week. All photos can be found in this set at Flickr.