Last month I flew to Chile for the 'Gathering of Open Science Hardware' (GOSH). I went there there with the idea to see a lot of hardware, exchange ideas about equipment and problems you face during equipment development, and of course meet many awesome people. Those cool people I definitely met but I actually did not see that much hardware! Nevertheless, the gathering was no disappointment and left a much bigger impression than I could imagine beforehand.

Instead of a 'one-direction' conference with talks you listen to, and that’s it, it was more a four-day during hackathon or workshop session. Everybody was asked to deliver input to create a roadmap that will help build the Open Science Hardware community.

The first day started with a story about the establishment of the community; a group of people that met each other at different places around the world who while talking realised they had the same ideas and should do something with it. Afterwards, there was a round of speed dating. That was so cool! With almost everybody I met I thought: “We have to work together!” or “I do something similar!” It was really inspiring to meet people from all over the world that work on similar projects or have equal thoughts.

Despite the fact everybody had similar thoughts and ideas the people at GOSH were extremely diverse. Most scientific or tech conferences are unfortunately still populated mainly by white males from western countries. The GOSH organisers put much effort in choosing a varied group of people. Because everybody was so different, everyone was also really equal and an expert in his own field. This, at least stimulated me to actively participate.

Participants had many reasons to choose for Open Science hardware; too expensive conventional tools, unobtainability of equipment or the empowerment of societies. As an example: Jenny Molloy made her own science equipment, Rafael Pezzi founded the Open University in Brazil to make data more accessible and I told something about the BioHack Academy that enables people to do their own bio(art)research.

The three messages that I took home from this gathering were: hardware does not has to be electronic, the difference between equality and equity and how to spread your thoughts. In our western tech-focussed society it is easy to forget that are enough places around the world where electricity is not so abundant.

Max Liboiron who does research in sub-Arctic Canada has to deal with power cuts almost every week. Therefore, she cannot rely on electronic tools for her research on micro plastics in the ocean. Adding to this, treating everybody equally by for example supplying everybody with the same tool does not mean everybody can achieve the same. Therefore, equity to make sure everybody can reach the same goal is much more important. Finally, there was a lot of discussion on community building and how to reach out. The conclusion from these discussions was that it is probably much more effective to build trust with people within communities you are not part of than preaching your thoughts as an outsider who does not understands the norms and values of this community.

After an evening with Chilean wine and pisco sours and an evening with improvised performances inlcuding DIY electronic noise generators it was time to say goodbye to a very diverse group of people that had one thing in common; changing the world. 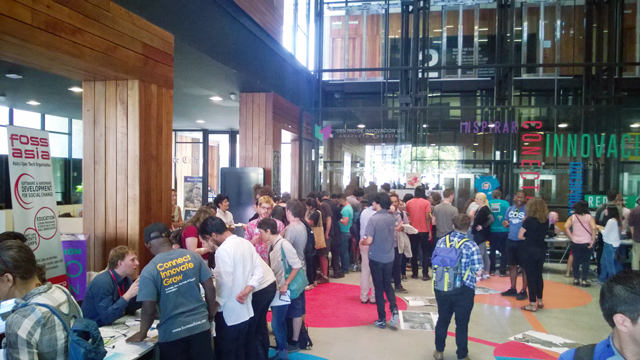