DSI and the city

Whereas the DSI (digital social innovation) policy agenda was mainly focused on the level of the European Union, we see that cities are strongest in materializing the DSI idea. It’s likely that the biggest impact is reached when those levels are connected. A new idea that could contribute to this ambition is the ‘third space’. In third spaces, stakeholders from multiple levels come together at urban nodes to shape the future without being preoccupied by administrative boundaries.

The birth of Digital Social Innovation

Since the emergence and growing importance of technology in our lives, there has been developing a community - parallel to businesses and the political sphere - that is aware of the potential of digital technologies to tackle social problems, called ‘digital social innovation’. An important pioneer in this field of social innovation was Diogo Vasconcelos. Started as member of parliament in Portugal, he addressed the social and cultural aspects of technology since its very early stage. Technology should have a human-centred focus, was his vision. After his work in Portugal he shifted his efforts to the European context. He was able to connect and organize people around the DSI agenda. This was so effective and inspiring for many people in the European Commission, that his efforts live on after his death in the form of an European Social Innovation Competition carrying his name. 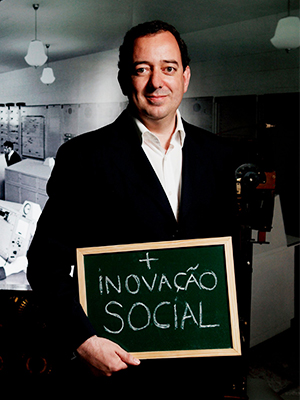 But more importantly, it paved the way for the Collective Awareness Platforms (CAPs), such as Digital Social Innovation for Europe. In this consortium with organizations like Nesta and Waag, Francesca Bria, currently working as CTO of the Barcelona municipality, brought the field to the next phase. Mapping out the many initiatives in Europe was a huge first step for a more comprehensive community. Another important direction that DSI community took, was linking up with similar communities like the Maker movement and Open Knowledge communities. The DSI community today is hugely diverse and has a critical role in the steering of technology innovation towards the common good.

Where is DSI now?

Whereas the CAPS started in 2014 with mapping out and studying the European DNA of digital social innovators, recent actions are focussed on policy influence. At a well-visited policy workshop halfway 2016, the DSI consortium brought practitioners even more closely to the innovation policy in Brussels, like DG CNECT and the Joint Research Centre.

MEP Marietje Schaake invited the DSI community to discuss the status and policy possibilities inside the European Parliament later that year.

With a DSI Fair in Rome in the beginning of this year, and another event to discuss the future of DSI in London, many efforts are made to connect European policymakers to the DSI practitioners and agenda. At the same time, the platform digitalsocial.eu is growing more diverse every week. From social enterprises, to charities and from civil society organizations to creative design agencies, many different stakeholders are represented on this solid platform for digital social innovation. DSI is a constructive movement that delivers opportunities to innovate policy not only on a European level, but also on a city or regional level.

Shift to the cities and the 'third spaces'

But the legacy of Diogo Vasconcelos, and technology that generates social value instead of extracting social value and bringing financial wealth to the few, needs a wider angle than the EU policy context. The urge for new policy creation is becoming more pressing, since the ‘Smart City’ concept isn’t living up to its promise. It’s currently built on an old model with top-down innovation organized by municipalities and an invitation to multinationals to push technology off the shelf on to citizens. These technologies have often not been reviewed critically in terms of privacy, data-ownership, power structure and fitness for purpose.

Innovation in cities is systemic by nature. Innovative urban solutions happen at the intersection of built form, public space, urban mobility, energy usage, ICT, nature-based solutions, social innovation, new economic models and new governance structures. It involves many different stakeholders. It acknowledges that the challenges cities face, are rooted in behaviour and human activity as described as the Anthropocene epoch, dating from when human activities started to have a significant global impact on Earth's geology and ecosystems. The artefacts and technologies that humans created are not only tools for change but are creating new challenges as well.

We see the participatory and open model of innovation taking off quickly, mainly in cities. The new concept is more about the ‘responsible digital city’ and emancipation of ‘smart citizens’. In this vision, ethics and horizontal innovation are crucial, by constantly looking for new connections and crossovers. This approach could especially be ramped up in so-called ‘Third Spaces’. A Third Space can be seen as a meeting place where you can participate as an individual contributor rather than in an institutional position. Inside these spaces, policy is formed in a new, horizontal way. Bottom-up initiatives are invited to present ideas and co-create solutions for urban and social challenges. The ambition is to move away from a compartmentalised policymaking focused on sectors to instead focus on solving problems and developing innovations generated by engaged citizens.

On 4 and 5 February 2017, at a successor event to the earlier EU Policy Lab circa fifty people convened to discuss and develop the idea of multi-level urban Third Spaces. Civil servants, a diversity of Commission staff, and social innovators from a range of partner institutions were guided through a process of conceptualization and outlined the route towards adoption of Third Spaces in the European political context. After introductions by Christian Svanfeldt (EC Joint Research Centre) and Marleen Stikker (Waag) and a highly educational icebreaker game, the participants selected and investigated example dossiers that could benefit from Third Space interventions. On the second day, we modelled the Third Spaces using creative materials and storytelling methods. Finally the audience worked on the question how to bring our agenda forward and discussed the next steps.

Co-creation of policy in a third space is a step further than inviting citizens to the city town hall for a public meeting. This is a neutral space where you’re not a guest but an equal contributor to the conversation. Cities often need multi-level approaches to their challenges, and see these ‘Third Spaces’ as an important place where these different stakeholders can contribute to innovation and policy making.

For example the Medialab-Prado in Madrid. In this citizen laboratory of production, research and broadcasting of cultural projects explore the forms of experimentation and collaborative learning that have emerged from digital networks. It is part of the Department of Culture and Sports (former Department of Arts, Sports and Tourism) of the Madrid City Council. Another example is the Smart Citizens Lab located in de Waag in Amsterdam. In this lab they explore tools and applications to map the world around us. Along with citizens, scientists, and designers, the participants deal with themes ranging from air quality to the conditions of bathing water to noise pollution.

Next to new spaces popping up, established institutions are shifting as well. Public libraries are taking on a new role, for example in Amsterdam, where makerspaces and fablabs are expanding in the neighbourhoods in close collaboration with the public libraries. In two years there will be 10 more maker spaces in many of the neighbourhoods of the city, combined with lessons about digital technology for the kids from the community. This brings the digital social innovation another step closer to a lot of young people in the city.

The DSI community is ready for its next step. With the European Union and the nation state under pressure, DSI delivers a constructive alternative for innovation. An alternative that is enthusiastically adopted by many cities in Europe, who see potential for new solutions in this bottom-up driven community.

It’s time to even further intensify the impact of DSI on cities. Let’s enter the 'Third Space'.

This project has received funding from the European Union’s Horizon 2020 research and innovation programme under grant agreement no. 688192.