How do you design a virtual apostle?

Alice Steneker is Game Artist at the HKU and intern at Waag. She is involved with the project Mixed Reality @ Oude Kerk and shares her experiences in the project. Firstly, there is an important distinction between a game designer and a game artist.

Alice explains: “At the HKU there are four different streams within the degree Game and Interaction, namely Game Art, Game Design, Game Development and Interaction Design. Whereas the game designer and other specialisations are focused more on the functions of the game, the levels, user interaction and the storyline, or the programming of the game, the Game Artist, on the other hand, focuses mainly on the artistic side of games.”

The HKU mentions on their website: “As a game artist you make graphics that represent the story of a game. Your work guides players in the right direction and shapes the game and entertainment industry.”

Finding that right direction and form turned out to be one of the most interesting challenges in the Mixed Reality project at the Oude Kerk. Three cycles were predefined in which we wanted to do different experiments with mixed reality to connect the past with the present. We chose the disappeared apostle statues and a triptych as objects to be placed back in the Oude Kerk (see also the last blog of this project).

“Experimenting with form and style and choosing the type and speed of animations were the most interesting aspects of our work. Together with the Oude Kerk we decided that we wanted to keep a certain degree of abstraction because we don’t exactly know what the original statues and triptych that we want to bring back with animations looked like. That gave us a lot of creative freedom.” 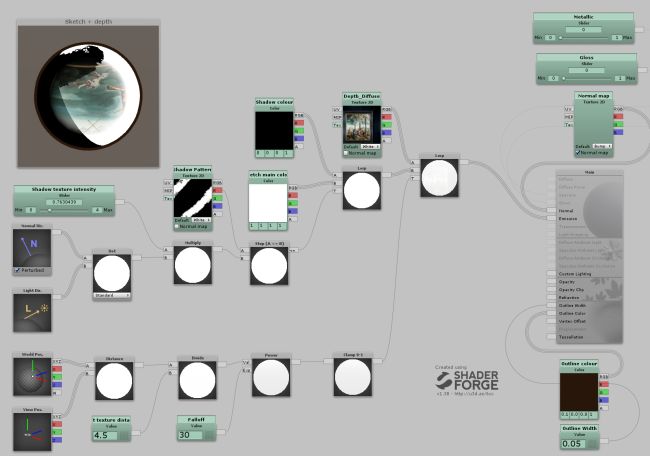 To make the 3D models, Alice used Autodesk Maya and Zbrush. Zbrush is used for virtually sculpting high resolution models and Maya can be used to bring the 3D model to a lower, more useful, resolution, which is also called making it ‘Game Ready’. The software programme Unity was used to apply shaders, also called effects, and animations to these objects. The images are then placed back in the church using a Hololens. This design process perhaps sounds easier than it is.

“Just like clothes, objects have different textures and coordinates. You can decide in steps what they should look like and how you want them animated, how fast, in which places, and in what style. The effects can build up, overlap or merge into each other. You need to have an eye for detail to make it look realistic.”

Because she is used to design it in virtual reality, in which she can control the whole environment herself, she sometimes comes across surprises when designing for the real space, which is made possible by the technique of the Hololens.

“When you make a design of a bench with a backrest as a game designer, and people put on the glasses and sit down on a real chair without backrest, you see that people lean backwards, even though something is missing in the reality. That is a special experience.”

This also happens in this project, where virtual animations change, influenced by the light of the church.

“People will look at it differently than you think possible or can predict.”

The work Alice does fits perfectly within Waag and the project Mixed Reality @ Oude Kerk, where game art, technology and public perception come together. Alice’s internship is almost finished, but she will work on the project with much enthusiasm for the next few months. After a first public demo designed to ask feedback from the visitors of the Oude Kerk, new research will follow in which different game elements will be tested with which the visitors can find the virtual apostle statues in the church.

“I think it will be fantastic to see the final result that I have contributed to. The aim is to give visitors a beautiful, enriched experience and I think it’s really cool that I could help shape this.”