The two sides of the prosthetics world

From September 18th to September 21st, the Orthotic & Prosthetic World Congress was held in Orlando, Florida (USA). Waag was invited to present the Low Cost Prosthesis project. I just got back from those intense four days, during which I listened to and met probably some of the greatest people from the prosthetic world and gathered an up-to-date knowledge about the current practices/technologies.

The congress was composed of three type of programs which ran in parallel: the exhibit hall (mainly presentations by commercial companies), the Technical Fabrication Lab (where techniques and materials were demonstrated) and the lectures (covering many aspects of the vast world of prosthetics, from business tips to education and training, passing by scientific papers and humanitarian action).

Looking at the exhibitions and the lectures, the two sides of the prosthetics world (which were visible already a few years ago when our Low Cost Prosthesis project kicked-off) still face each other.

In the majority of the exhibit hall and the lectures, one could see see the latest products manufactured by about 200 companies. Comfort and performance are the mottos. I discovered a very interesting technique (called 'elevated vacuum') which uses a small pump in order to get a vacuum between the socket and the liner (the ‘sock’ worn in between the the residual limb and the socket). The pump is ‘smart’ and will make sure the vacuum in the socket stays the same. The CAD/CAM techniques are also slowly spreading with for instance a 3-D scanner (see main picture) and its software, where the prosthesist can prepare the socket to be made in a time and cost effective manner. But due to the high starting price and the needed extra training, many practitioners simply can’t afford it.

Meanwhile, the ‘low cost’ side is dealing with material shortages, the education of local staff and problems at the customs to get supplies into the countries. A major concern addressed also is the potential harm that can be caused while intending to provide care. Those concerns were repeated a couple of time by some main actors of the field like Peter Poetsma from the ICRC (International Committee of the Red Cross), and clearly pinned down by Mary Kwasniewski (Sr. Director Physicians for Peace) with the Code of Conduct for Nongovernmental Humanitarian Assistance, which you can read here on the website of USISPO (the US branch of the International Society for Prosthetic & Orthotic). 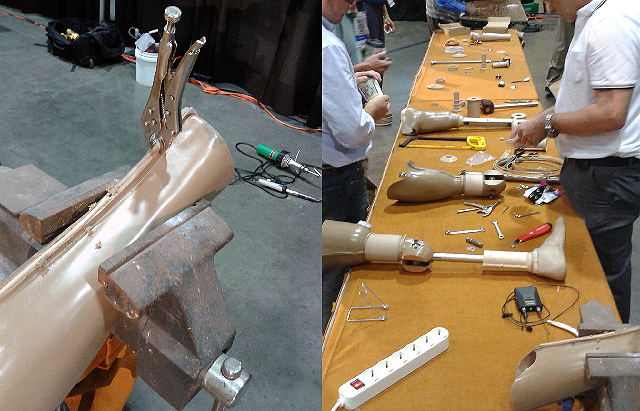 The ICRC also demonstrated their full polypropylene technology. All the parts from the socket to the top of the foot are produced in polypropylene. This allows the leg to be assembled quite easily by sawing the pieces at the right dimensions, and assemble them by melting the two plastic extremities together with a soldering iron. This assembling technique is pretty robust as they can reach from 80% to almost 100% of the original material strength at the welding point. But, it goes without saying that the price of the material is depending on the price of oil, and issues still remain in some countries concerning the import of the material, which is at the moment produced by just one company in Switzerland. In some countries of South America for example, the state rehabilitation centers are sometimes bound by local purchase policies. Often the material needed or the production scale needed isn’t available locally. 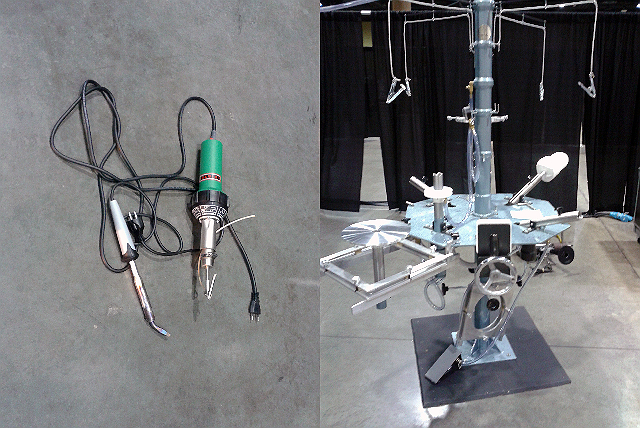 While some people can work with only a saw and a soldering iron (see above), others do so with a fully-equipped workbench. One common denominator between the high-tech and the low-tech prosthetic professional is the handcraft. While in the countries without high-tech facilities the handwork seemed obvious, I was surprised to see, even in the US or in Europe, how much work is still done by hand. The process is far from being automated. Some of the components are of course standardized, but it belongs to the prosthesist himself to assemble the components (purchased or made from scratch) and give shape to each single prosthesis.

Back to our own project. Here are some inputs concluded from this congress, brought by the high-tech and the low-tech sides of the prosthetic community: