What we can learn from lichens

In order to learn more about our environment, we can use measuring sensors. Using air sensors allows citizens to collect information about their environment, for instance to map air pollution. This is what we call citizen science. But there are also other ways in which citizens can become informed about the state of their surroundings. Lichens, for instance, can teach us about ammonia (nitrogen) pollution.

During the Green Maker Space #2, we investigated the air quality at the Amsterdam Science Park by observing lichens. Lichens are a symbiosis between fungi and algae which can be found almost everywhere. The environment determines the species that can be found in specific areas. This means that the species that you find in an area, also inform you about the state of the environment in which it exists. One of the ways in which lichen species differ, is their response to ammonia. The presence of ammonia increases the likeliness of some species to thrive whereas other species might disappear.

During the workshop, we ventured out with a set of worksheets. With these worksheets participants were able to translate their lichen observations for specific trees into nitrogen values. By using coloured stickers for the observations we made on a map of the park, we created data visualizations of what we encountered on our walk.

A few participants had prior experience with the method, and for some of them, it was the first encounter with lichens as a species. This meant that for a majority of the participants, they were exploring a completely new method. The result?

Everyone collected their own type of insights that fitted the questions they formulated themselves. While some stayed loyal to the workshop question and mapped nitrogen pollution all over the park, others took a step back from the nitrogen question and explored the diversity of lichen species on different tree species. 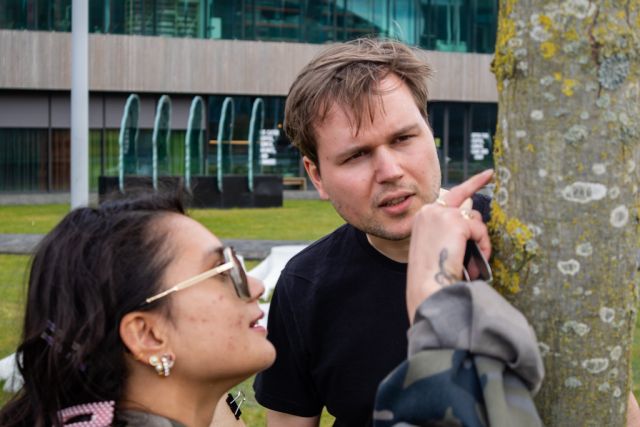 In conversations about the insights, it became obvious that the participants discovered many different things. They for instance learned about the opportunities of environmental observations, and in this workshop specifically the link between nitrogen (ammonia) and lichen.

It is difficult to decipher an unambiguous conclusion, based on the variety within the collection of individual maps. However, the results suggest that the area is indeed nitrogen polluted. The average pollution value was 1 on a scale of -2 to 2, for which -2 counts for clean air and 2 as having high ammonia values. 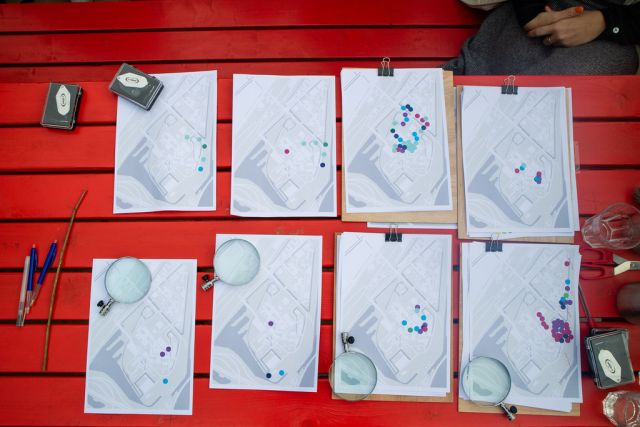 Science invites you to look at things differently

During the moment of reflection, one of the participants described the impact of the workshop as (freely summarized): ‘Art invites people to take a closer look. This workshop is an example of how science can do the same. Today we learnt about lichens through science, which in return will make us from now on look at lichens in a different light.’

This workshop is a part of my research at the Technical University of Eindhoven, in which I explore more-than-human inclusive citizen science. In the research I aim to uncover which roles nature could play in such projects in which humans actively engage in the collection of data. The goal of the research is to contribute to better and healthier relationships between humans and nature.

The nitrogen value calculations in this workshop are based upon studies by the BLWG (Bryologische en Lichenologsiche werkgroep of the KNNV), whose guide has served als information and inspiration for this workshop.

About the Green Maker Space

The Green Maker Space is a monthly open workspace from Waag at the Startup Village at Amsterdam Science Park. Here, we bring together neighbours, students, workers and researchers to have a look and listen to nature together. Register for the third edition on Wednesday May 25, where we'll have a picnic between 12:00 and 14:00 hrs. with green experts!

Or go to Picnic with green experts voor meer info.

On Tuesday June 24, you can learn how to read lichens at the Pieter Vermeulen Museum in Driehuis with Lotte Sluijs.

This project has received funding from the European Commission under the H2020-SC5-20-2019 call under Grant Agreement number 868887.

An inclusive nightlife for humans and other creatures