“I think quantum music will become an open platform, quantum is such a big story”

There is a great mystery surrounding quantum physics and the complexity of it. As part of the Better Future Now Festival, Waag organises the event Quantum: new rules or a whole new game? on Friday 23rd of September 2022. During this public program a panel of artistic, academic and societal experts shine their light on quantum from their own specific angel. Pianist Andrija Pavlović will speak about his artistic work, and present the Quantum Music project.

First things first. What is quantum? A quantum literally means the minimum amount of something by which it is or can be quantised. In the early decades of the 20th century, one of the peculiar things physicist found is that reality on a very small (subatomic) scale seems to be best defined by quanta rather than by a continuum, hence the name quantum physics (or quantum mechanics). Currently this is the most accurate theory to describe physical properties of matter and energy at the most fundamental level.

Quantum Music is a project with the aim to explore the connection between music and quantum physics through the creation of a new live performance show.

Andrija Pavlović (1980) is a pianist and composer born in Belgrade (Yugoslavia). With his colleague, pianist Sonja Lončar, he formed LP Duo. The duo are leaders of the pioneering art & science project Quantum Music and inventors of a new musical instrument - the Duality Portable Hybrid Piano. They are working on translating quantum concepts into sound and music since 2014.


The Quantum Music project in Delft is now coming to an end. What is the outcome?

We created a very interesting multimedia performance that is touring through Europe at the moment. During the Quantum Music project, me and Sonja created a new instrument: the Duality Portable Hybrid Piano. This instrument is a real new thing! The hybrid piano creates a MIDI output from a concert piano which enables us to play synthesizers using the mechanics of a piano. Along with the hybrid piano hardware, a complementary software is produced. Its sounds and timbres relate to phenomena of quantum mechanics. The hybrid piano will be used to incite waves in a Bose-Einstein condensate (a state of matter where atoms are cooled to absolute zero). Only at such conditions where matter is cooled down so much that it almost doesn’t move at all, quantum effects become visible. This way specially composed music can be transferred to the quantum level. Bringing new sounds that stem from the work we’ve done with quantum is one of the big artistic outcomes. 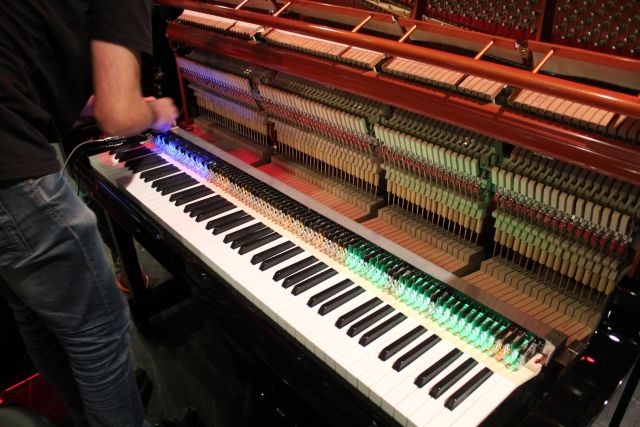 Curious of how that sounds? Have a look at the live performance of ‘Collaps’  on two Duality Hybrid Pianos.

Did you extract and record already existing sounds, or did you create your own sounds during the project Quantum Music?

Both. You can already extract some sounds of atoms, for example by experimenting with the process called 'scanning tunneling microscope'. That’s the sound I recorded with Prof. dr. Sander Otte (TU Delft). When I was a Kavli artist in residence I had the opportunity to closely interact with scientists from the Institute of Nanoscience and take part in their lab work. Take for example an experiment where scientists cooled atoms to near absolute zero, the coldest point you can imagine. The atoms were running around very fast when they were cooling down, finally becoming one big atom together. Then they hit them with lasers which made the big atom create some kind of mechanical wave. Any mechanical wave can form the base of a sound wave. We were getting data from experiments from Prof. Klaus Mølmer (Aarhus University), and then using a process called ‘additive synthesis’ (a sound synthesis technique that creates timbre by adding sine waves together), producing samples and banks to compose and perform new music.

Is a piece of Quantum Music completely composed beforehand or is there also a live or improvisational aspect to it?

Most parts have a clear structure but they also include improvisational parts. At some point we started recording artificial intelligence-produced voices. I like to call the AI-voices Brain and Amy. These AI-voices brought poetry into the multimedia show.

“For me, the main question is, how humanity can live and work together with the machines and artificial intelligence that we’ve created – especially in a world where technology is so fast and well-developed”.

For the show, we were trying not to use the real hardcore explanation of what is happening in this quantum science. I just wanted to create something that is more connected to the world we are living in today. Because for me, the main question is, how humanity can live and work together with the machines and artificial intelligence that we’ve created – especially in a world where technology is so fast and well-developed.

In what way can the audience experience the poetics you mentioned earlier?

In the visual part of the multimedia show, which was created in collaboration with an artist whose artist name is ‘Incredible Bob’, graphical solutions based on multiple quantum experiments helped the music and the story.

“I want people to go home with new ideas, fresh energy and some new emotions that maybe they couldn’t express before.”

The poetics of quantum music can be felt in the spoken word that comes from the AI-personalities Brian and Amy. In a way, they are playing the concert with us. They also challenge the audience by giving them questions to think about. I want people to go home with new ideas, fresh energy and some new emotions that maybe they couldn’t express before. When we play quantum music for an audience, it can be quite emotional.

I would expect Quantum Music to be quite rational because of the technology, but the audience reacted to the emotionality of it. Was that the main response you’ve gotten?

Yes, isn’t that interesting? In a way, music is already very much connected to science. I’d like to look one step before that; how did people in ancient times start to express themselves? For me it should be about the communication between listeners and performers. Gathering around music is an ancient ritual.

The music comes from all these conversations and inspiration from Quantum, but first of all it has the purpose to move and trigger people, to ask questions. Music is perfect for transcending emotions, especially because music is so abstract.

How do you see the future in Quantum Music? What will happen in 5, 10 years?

At the moment, we are trying to find a way to work with all the topics that came up in the Quantum Music project for the next five years. But if you ask me about the future of music, I must say that I’m a little afraid. Music today is becoming more and more a kind of algorithm that is so predictive. I see music becoming detached from its essence of being a human ritual and a tool to transcend. I think art and science should have a strong ethical awareness to help us to create a better world.

Quantum music will become more of an open platform, since quantum is such a big story. Also the music we made for the quantum music project is just one of many ways to do it. Quantum music is just inviting people to be involved in science and to compose in a different way. I’m trying to put the light into the unknown.

Do you want to know more? Join us on Friday!

This event will be in Dutch

This event is part of the project Quantum Inspire where Waag aims to give more users access to the technology so that they can independently program and run quantum algorithms. Waag will investigate the implications of quantum computing for society together with users.

As part of the Quantum Inspire project, Waag and partners will organise a series of co-creation workshops, bringing together and inspiring students, artists and tech-minded citizens. The first workshop is scheduled for September 23 (10:00-15:30). Two more will follow at the end of November 2022 and March 2023. Are you interested? Mail to albana [at] waag [dot] org

Quantum scientist, I'll take you by the hand

Diary of a Quantum Novice