Waag stood to the cradle of Apps for Amsterdam, Apps for Province of North-Holland and Apps for the Netherlands, and soon the contest Apps for Europe will start. In all these cases, we ask developers to commit themselves to a good cause - more transparancy and efficiency for the government, innovation - with the prize coming in the form of public appraisal and a sum of money to be won. This leads to much enthousiasm en nice Apps, but regrettably in many cases these do not live too long. To change that situation we organized a meetup for App contest organisers on 20 October 2012 at the OKFest in Helsinki.

26 people participated in the meetup. Everywhere in Europe and outside app contest are organized. They mostly have in common that they want to involve local developers in solving social and economic problems. To reach that goal, a thriving group of makers is required that know the route to their potential commisioners: local authorities, companies and the public and it asks from the commissioners that they know what to ask for.

All App contests have in commons that the results dissappear shortly after the contest has ended. This has many reasons: the data is not good enough or the Apps are not good enough, not enough marketing effort has been put in or the developers are not interested any longer and are focussing on something else. Whatever the reason, the high expectations are not met.

A part of the solution might be to recognize that App contests all have have different targets. Depending on that target, something else might be needed to reach sustainable results.

The get to sustainable results, a combination of several elements is neccesary. Firstly: find a rich community of makers that is truly committed to good results. Secondly: organize contests that really challenge developers to get outstanding results. And last but not least: take care that the connection with entrepeneurs is made to get a wide distribution of the results. (Also see the graphic below by Julian Tait, 'Innovation Chimney for the creation of an ecology around open data based services'). 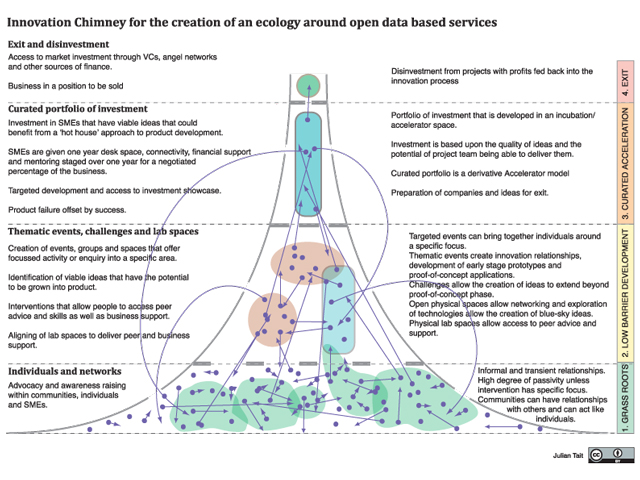 I think we're on the right way with the second edition of our Apps voor Amsterdam contest. It focusses on six themes, each having a 'problem owner' at the municipality responsible for the data and results. In this way we hope that the results will indeed be used widely. The contest is now in full swing, entries can be submitted until 19 October 2012.