MAD summerschool, sounds like a crazy summerschool but it actually stands for ‘Man and Design’ i.e. a design summerschool. Held in Sigulda, Latvia, where traditional crafts are still vivid. The aim of the summerschool was to introduce design students, often working digitally, to the hands-on traditional crafts: ceramics, bark working and the blacksmith and combine them with contemporary crafts such as 3D printing and electrical wood working.

Young promising designers os and oos (NL), Wang and Soderstrom (SE) and studio mischer traxler (AT) attracted students not only from all over Europe but also from North America.

As the theme of this year’s summerschool was ‘biorevolution’, and related to food, I was invited to talk about biohacking and future foods. To get a hold on biology we visited a farm and Claude Oprea, who was part of Biomodd London, shared all his knowledge and enthusiasm, about permaculture. As a form of team building the 30 students and their tutors were challenged to build an algae reactor together. The groups got an air pump, some tubes, connectors, four 0,5L bottles and off they went.

During the building process of the algae reactor and also later that week I learned a lot about human interactions; people’s reactions to stress, male/female relationships and cultural differences. For example telling people they had only 10 minutes left to build the algae reactor (actually only to get them started) resulted in some people, mostly males, taking the lead and others, mostly female, facilitating this dominant male role.

The design brief: farmers without land was specified for each group with a specific theme i.e. mobility, food, energy, tools or materials. The mobility group made beautiful garments using the different crafts to be able to grow crops without land and to make pollination possible by human interactions. The tools group created analog, biomimicry tools to be able to find food in a future dystopia. Thorough research was performed by the materials group how they could use food waste for creating biomaterials and made a machine who could perform the process. And our group, team NRG (the energy group), made a community-based installation using electrolysis to extract valuable minerals from soil that is created by worms from your food waste, to make for example mineral water. 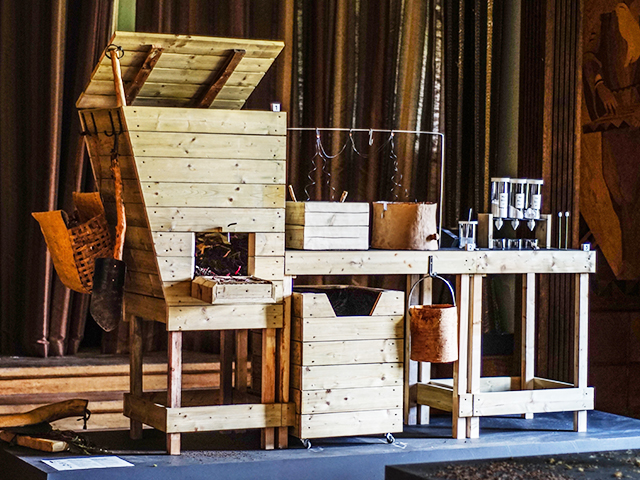 The final installations ranged from scientifically based concepts to mere aesthetic art pieces. This clearly reflected the background of the tutors of the group. In my opinion the final pieces were very good from a design perspective, but from the biology point of view less strong. This made me realise that to look for feasible future food solutions, designers and scientists should work more closely together.

Do It Together Bio