How can you visualize emotions?

Dóra Kerekes, intern at our Future Heritage Lab, is looking at ways to visualize emotion networks.

In today’s society it’s not obvious anymore that we share the same cultural background with the people that hold the same passport as we do. The project "Emotion networks" aims to visualise how people with different backgrounds, experiences, genders and ethnic groups might connect emotionally to certain heritage items. Despite of our passport we might think the same way about numerous topics and vice versa.

To illustrate this, we’ve been investigating different methods on how to gather people’s emotional responses, and how that could be accessibly visualised. The current version displays a network that consists of different nodes which represent different heritage items. Each heritage item is surrounded by smaller nodes, each of which represent one individual. The colours of these individuals are based on the emotions of that person, evoked by that specific heritage item. The basic layer of emotions, also known as “basic emotions” consist of Anger, Sadness, Disgust, Joy and Fear. These emotions and their assigned colours were chosen after reading extensively about the work of Paul Ekman, American psychologist who is considered a pioneer in the study of emotions.

For theoretical and practical reasons, we’ve mapped out these emotions in two dimensions. This mapping is based on one of the dimensional models of emotion, called the “Circumplex model”. It was initially developed by James Russel, who suggested to distribute the emotions horizontally based on valence, and vertically based on arousal. Based on these two axis we could add more nuanced layers of emotions, assigning them with unique positions and colours in addition to the basic ones. When a person feels more emotions at the same time, its position is calculated by the average of his/her given emotion data all together. 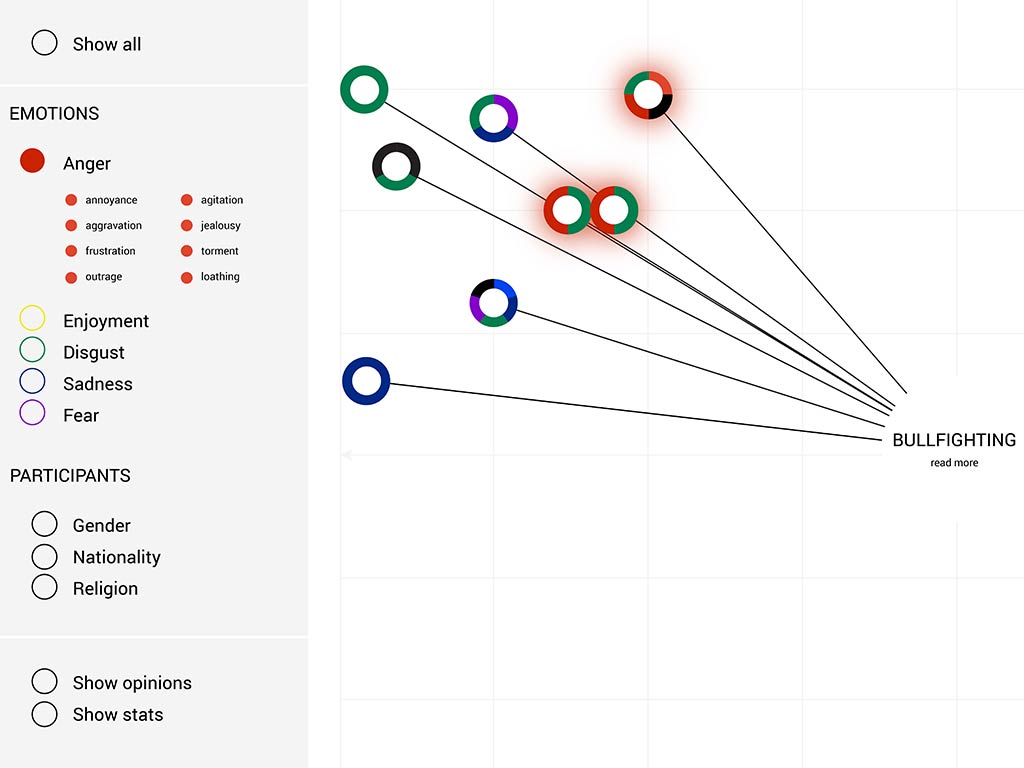 To test out how this system works, we asked our colleagues here at Waag to participate in a small survey about bullfighting. We thought it’s the kind of topic that would start a discussion and result in different kinds of emotions. The information they shared with us manifests itself in the first design sketch. Later this structure was developed into a small tool so that the visualisations can be generated based on the data of participants. (see image above)

This research project is held in cooperation with Imagine IC and the Reinwardt Academy. It is also part of my internship as a fourth year graphic design student from the Royal Academy of Art, The Hague.  During my internship other visualisations, methods and models are going to be explored further.