What if you could measure nuclear radiation with the camera in your laptop or smartphone? Living near a nuclear power plant, you might take this opportunity very serious.

People that are living in the vicinity of nuclear power plants are dependent on official measurements in the case of incidents. With the camera in a laptop or smartphone it is possible to count radiation and detect if something is wrong. In a series of workshops in cooperation with municipalities in the southern region of the Netherlands, Waag, RIVM and WISE International are exploring the possibilities of this new measurement strategy.

So why do we need citizens to do the measurement? "People find it hard to trust authorities on this topic", says Peer de Rijk from WISE International, a NGO that is campaigning for cleaner energy since 1978. "After incidents or accidents the government’s first response is always: don’t worry! Don’t panic. Which isn’t always justified."

Therefore, the partnership with the institute RIVM has a lot of potential. The RIVM is officially responsible for the measurements of radiation throughout the country. They also see the huge potential of citizen science. "We are in transition", Hester Volten from the RIVM explains. "Why? With all the new technology in everybody’s pocket, it is possible. It’s fun. And it will happen anyhow. So let’s tap into it, while we can."

For Waag, these workshops are part of a bigger European project called Making Sense with participating pilots in Barcelona (Spain), Pristina (Kosovo) and Amsterdam. In Making Sense, the main goal is to empower people with technology that allows them to ‘make sense’ of their environment. Next to awareness on the topic, it will show the potential of citizen-driven data collection, which eventually leads to people making more informed decisions on behavior in their environment.

The first workshop, organized in Bergen op Zoom, brought together an interesting group of students, experts, policy officers and worried citizens. By putting citizens at the heart of the data collection, creative and unusual questions will arise. "How will we get reliable data?" was a justified concern that is important to look at in the future. But also questions like: "What kind of radiation is dangerous for me and what not?" show that there are definitely some serious questions and concerns around this topic.

One of the students joining the workshop saw some creative business opportunity: "if we can measure radiation, we can see where a totally ‘radiation free zone’ is located. What about creating a radiation free spa & wellness zone for people to relax and de-radiate for some time?".

On April 21st the exploration of the measuring tool and citizen engagement in data collection of nuclear radiation will continue in Eindhoven. On May 19th the workshop will take place in Maastricht. 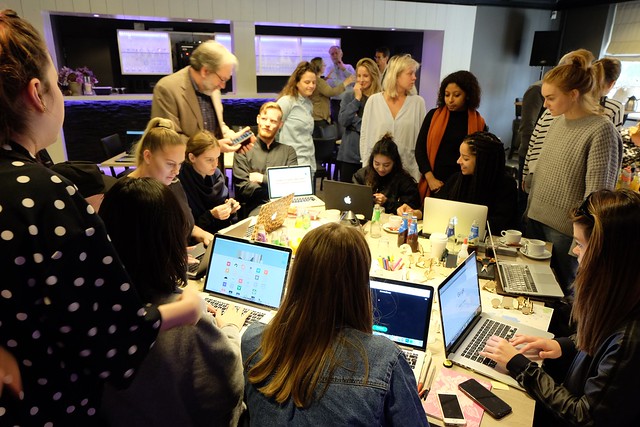