The robots are coming to help us

A care robot with a name that reads as a number plate: the P37 S65. Of course, this is still a prototype carebot, developed by Antonio Espingardeiro, PhD student at the University of Salford, Manchester.

A video that Antonio made with the robot does not directly convince you, but the university already calls it a 'revolutionary care robot'. With its angular design, the robot (that is just as tall as its developer by the way) looks as it has escaped from the set of a B-movie from the fifties. It seems people everywhere are working on these 'care robots', that are going to help the elderly. The P37 is there to remind you to take your medicine or do not forget important appointments, but can also act as a buddy and tell jokes, it is said.

All these carebots in development makes one think of the movie 'Robot and Frank', that was released in 2012, but only shown at the Leiden International Film Festival in The Netherlands.

This movie is situated 'in the near future', and the nameless robot that acts in this film is therefore a bit more advanced than the P37 S65. Main character is Frank, a retired catburglar living alone while his successful son, Hunter, tries to care for him from afar. The robot is a gift for Frank, who has all the signs of a starting Alzheimer. The first encounter between Frank and the robot directly brings up this brilliant dialog, as the robot says: "Hi Frank, it's a pleasure to meet you", and Frank answers: "How do you know?" 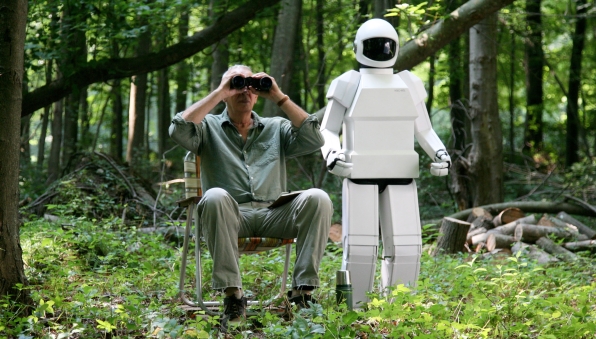 It gets interesting when Franks tries to restart his old profession and soon learns that the robot is useful as a burglary aide. The robot does not take a moral position and is easily persuaded as Frank calls the burglary beneficial to his health and thus fitting in the robot's objectives.

This movie is in fact rather positive about the use of robots as caretakers: soon after its entrance his house is tidy and clean, his diet is balanced again and he has regained a purpose in life. And besides an awful high pitched noise it produces, the robot has a pretty voice and gives intelligent answers. A nice confrontation comes with an older quare specimen, a library robot called 'Mr. Darcy', that in a conversation can only come up with the phrase "I'm functioning normally".

Anyone interested in care robots should certainly see Robot and Frank, but avoid watching the trailer, as it shows all the key scenes (this happens too often these days). The movie can be bought on dvd or watched through online services.