Esmee Geerken's research into building in funny and absurd ways

Artist and geologist Esmee Geerken is research fellow at Waag, currently working on our T-Factor project. Her research is focused on building while including nature: what can we learn from nature's structures and how can we build our houses and cities in such a way that we work together with, instead of against, the ecology of our surroundings? In order to investigate this, Esmee is hosting a walk with artist collective De Onkruidenier on the 28th of March, which will kick off a symposium of three online events called Building as Being. All events are free to attend!

Hi Esmee, the last time we talked, you just started with your artistic research at Waag. How did it go?
During my residency, I mainly focused on material research. I’m fascinated with the question of how life and the variety of life forms come into being. How does order originate out of chaos? Nature is able to create order out of chaos, due to materials such as minerals, that form structures on an atomic level. I wanted to see whether we can use this way of building as a source of inspiration to think differently about the way us humans create our urban surroundings.

During my residence, I worked with organic and mineral substances, like bioplastics (plastic made of natural resources such as starch) and calcite grains. The latter is a mineral that is distilled from our drinking water during the decalcification process. I wanted to create an external skeleton with these two materials, imitating shellfish. The goal was to create a hybrid form between our clothes and organic materials (wool, linen, synthetic fabrics) and buildings that largely consist of minerals (stone, cement, sand, clay).

Esmee gets up to show several samples, including a legging made with bioplastics and calcite grains, that imitate an exoskeleton.

In the process, I found out that I’m not a designer in the first place! I enjoy making patterns that come into existence ‘on their own’. That’s why I’m currently doing interactive building experiments, in which unexpected actors such as minerals, bodily fluids and plants are brought together so that they can create new forms, in interaction with each other. In the meantime, I’ve become research fellow with T-Factor, which enables me to make more long-term plans. Right now, a new phase is starting.

Yes, together we’ll soon be hosting the symposium Building as Being. But first you’re making a city walk through Amsterdam Science Park on Sunday the 28th of March. Why did you want to organize the symposium?
We’re currently in a situation of not living in harmony with the ecosystems and climate systems anymore, while we’re actually part of these systems. Ever since the rise of the dualistic thinking (thanks to the philosopher Descartes, since 1641), we have come to see ourselves as separate, or in opposition, of our environment.

Of course, this is our animalistic habit: the need to create nests and niches. But we have become a sort of plague to ourselves and the ecosystem, because we design our environment based on human needs. I want to explore ways in which we can build in a more harmonious way: with our surroundings and with other organisms. Building is a way of interacting with your environment and being part of it at the same time. That’s what I want to investigate in an absurd, funny way and on different scales. The symposium is part of that exploration.

Can you tell us something about the program of 'Building as Being'?
With Building as Being I will bring different disciplines and forms together, even though they don’t seem to have an apparent relation with each other at first glance. I’d like visitors to discover new cross connections.

We’re starting with a prelude on Sunday the 28th of March: a walk at the Amsterdam Science Park, together with artist collective the Onkruidenier. This collective enquires ways in which we can adapt to our environment, instead of the other way around.

Register for the walk

What can the visitors expect?
During the (livestreamed) walk, we’re going to discuss the history of the landscape and the ways in which the Science Park has evolved and grown. We’re not only going to look at buildings: the Onkruidenier also knows a lot about plants. Walking is a nice way to loosen our thoughts a little more, and to have a more loose and artful perspective on things.

After the prelude follows the symposium in April and May. It will consist of three online events with talks from artists and scientists. I’ve often noticed scientists are walking around with the wildest ideas in their heads, which they can’t explore within the realms of spill out into their academic work. I want to offer them a platform and a space to engage into dialogue with an audience. They will be explorative evenings, where ideas don’t necessarily have to be scientifically supported or peer reviewed yet.

In search for more harmonious, nature-inclusive ways of building, you’re often inspired by microscopic biological processes. How are you subsequently planning to scale this up to human proportions?
There are different ways of thinking about ‘building’: the growth of minerals, the formation of consciousness in the human mind, and literally building a building. Every evening of the symposium has a different theme on a different scale that I thought would be interesting.

The first event (Thursday the 1st of April) starts off with The City. That is the larger frame in which we want to place ‘building’: sustainable future urban ecologies. In order to realize this, it seemed important to look at The Mind on the second evening (Thursday the 15th of April): both the individual mind as well as collective consciousness.

The third event (Thursday the 22nd of April) is on the scale of Matter: we zoom in on how everything comes into being from the level of the elements, where chemical and physical laws rule. This is based on the idea that the bigger scale cannot exist without the smaller.

Register for the first symposium event

Who do you hope to see at the walk and the symposium?
Everyone who has a broad interest in life and its workings: artists, architects, designers, scientists. On the second night, there’s also going to be a ‘Wondermachine’-performance by the Interactions group with Orion Maxted, in which I will participate as well. The Interactions group experiments with associative forms of collective thought. Hopefully, we’ll be able to create some original perspectives on how to build, and the role that our thinking plays within that.

Sounds like fun! What will you be working on in the nearby future?
After the symposium, I’m eager to organize workshops with kids from the Science Park neighborhood. For example, to have them building huts together with plants and animals. Also, I would like to work more with several scientists such as dr. Sharon Wohl (keynote speaker at the first event) and professor Brian Castellani (keynote speaker at the second event).

A few days after this interview, Esmee Geerken heard that she is selected as an ArtScience Fellow for the upcoming year at the Institute for Advanced Study, University of Amsterdam. 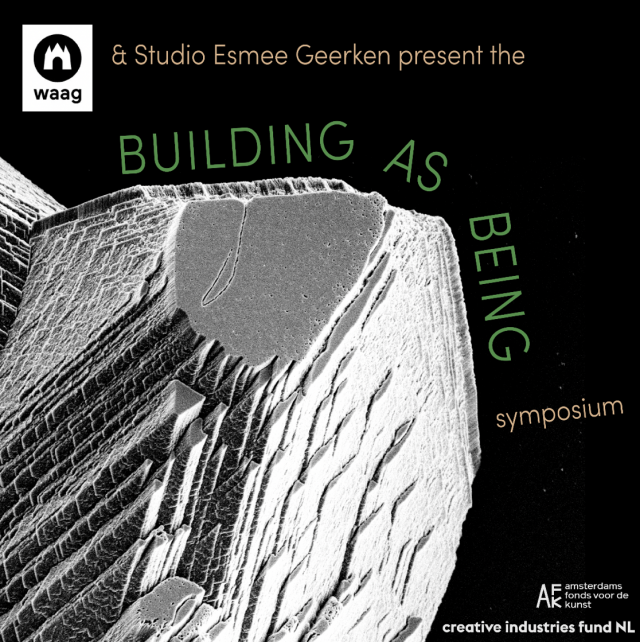 This project has received funding from the European Commission under the H2020-SC5-20-2019 call under Grant Agreement number 868887.

An inclusive nightlife for humans and other creatures

What we can learn from lichens