From transgender space travel to living in the here and now

Waag had the honour of having Adriana Knouf as our artist in residence for the Art4Med project. During the last year, she continued her research on xenology, the study of what is foreign to us. Her journey led her to add an ecological layer of meaning to her work, derived from a newly found fascination for lichen. It’s time for a throwback!

To understand a bit better where Knouf came from: she previously researched the possibility of (trans)human space travelling with the work TX-1. A piece of a transgender woman travelled into outer space when she sent a sample of her hormone patches to the International Space Station.

However, when the art-scientist landed at Waag, Knouf came to realise that human bodies aren’t the most adequate for space travel, as they need many adaptations. This is in contrast to a species such as lichen, which does have characteristics that make them already capable of withstanding the extreme conditions of outer space.

The meaning of lichen 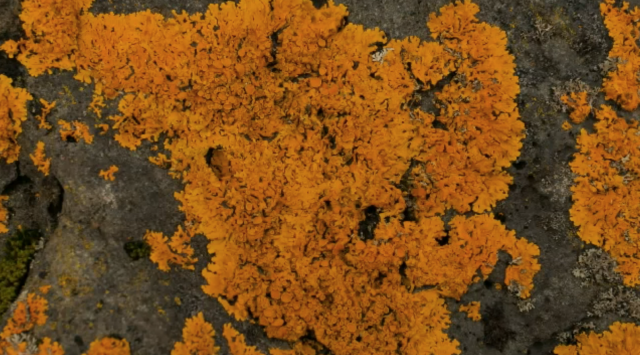 Lichen stand apart because they are an interspecies symbiosis, formed from fungi and cyanobacteria or algae, so closely intertwined that they are perceived as one organism. Lichen are also meaningful because they make us think of longer life spans, a deeper time, of symbiosis and deep mutualisms in the way they live. They are highly involved in transformation, for example as the first organisms to come to life on the matter that derives from volcanic eruptions.

The meaningfulness of lichen within Knouf’s work came to life at the Speculative Writing Workshop for T-Factor, for which she was invited to give a talk on xenology. T-Factor is a project that focuses on nature-inclusive ways of living with both human and non-human entities. The writing workshop specifically researched nature-inclusive ways of communicating with non-human entities. Knouf made a valuable contribution by inviting the participants to write a letter to the lichen that they found at the local site of Amsterdam Science Park.

In this way, lichen definitely took the spotlight of the residency, which turned into a concrete form in Adriana’s own workshop Preparing for Uncertain Times. The workshop started by learning how to look for and to find lichen in all everyday environments, and to know about them. Then, the workshop included the writing of a letter where the notions of (queer)science fiction, deeper time, and new futures could be explored.

How to live here, on this planet

Through the work with lichen, the workshop and the letters, Knouf’s research became not so much about how to go to space, as originally imagined, but about how to live here on this planet. A relevant lesson we can learn from the lichen is how to transition, a notion that could be originally understood as technologically mediated, but in the case of lichen, transitioning is also ecological. The research residency at Art4Med also led Knouf to lecture at the course Ecology Futures at the Academy of Art and Design St. Joost in Breda.

Adriana's current project ‘Amateur lithopanspermia’ stems from thinking of organisms in extreme environments such as Antarctica and in space, particularly about lichen. This work has been selected for a residency at Art Hub Copenhagen as part of the European STARTS 'Repairing the Present' project, for which she will start her residency in March 2022.

We're excited to continue working with Adriana Knouf for an upcoming exhibition in Paris and by inviting her to curate an Open Thursday public programme at Waag.

>> Read the interview with Adriana Knouf at the beginning of her residency: Dr. Knouf aims for transgender space travelling

>> Are you interested in ecology and lichen? Join us Wednesday 13 april with the workshop 'Reading Lichen' at the Green Maker Space!

Register straight away for the workshop