Women in Fashion: paving the way for female entrepreneurs

Women still get paid less for equal work. Fewer women are in leading positions, fewer are present in start-ups, and female-led businesses receive less money from investors. These were the starting points for a panel with four leading women from the textile and clothing industry took place at Waag in Amsterdam as part of the shemakes project, lead by Ista Boszhard, one of the co-founders of Waag’s TextileLab.

The goal of this panel was to discuss the gender gap in this industry and unravel problems connected to this gap. Personal experiences and various perspectives were shared and fed into the discussion about working towards stronger support networks and enabling women to step into leading roles.

And with contribution of Annemieke Koster, a communication scientist and entrepreneur, and founder and owner of Enschede Textielstad, currently the only existing sustainable weaving mill in the Netherlands.

How is the gender gap affecting the textile and clothing industry?

The panelists had different experiences when it comes to the gender gap but acknowledged a need for systemic change, a shift from a more “masculine” to a more “feminine” system in which “feminine” traits/values are cultivated and valued (as much as “masculine” ones). In the discussion with the experts the complexity of the problem and its interconnected topics were confirmed. According to economist and entrepreneur Ytha Kempkes, our current systems and structures can be described as “masculine”; stimulating a culture of competition rather than collaboration, striving for growth instead of sustainability or care, and stimulating "masculine" behaviour (in both men and women) that becomes problematic in a time where a more holistic and value-driven approach is needed. 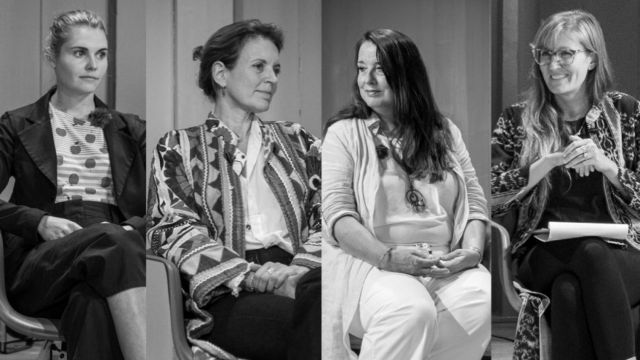 Business models and the dominant ideas about success, growth and sustainability have to be rethought and developed. Annemieke Koster endorsed this vision, but stressed the importance of “masculine” traits as an entrepreneur, like boldness and being daring which can be found less in women (in general). According to Maartje Janse, “feminine” traits should be valued and taught / cultivated more, while at the same time changing the system and the way we work. All these needed traits don’t need to be found in one person, but can be found in a team or a network of women, according to Koster.

How to bridge the gender gap in the T&C industry?

A layered approach (focusing on the system, culture, payment-gap, validation of work, et cetera simultaneously) is needed to support more women toward leading positions and in entrepreneurship. Roosmarie Ruigrok stated that equal payments and a stronger focus on content of work and jobs as a starting point, can ensure that this happens. Despite the reluctance to ascribe certain traits / values to men or women, the panelists agreed that women need to support each other by acknowledgement, facilitation, knowledge sharing and collaboration.

shemakes is a two-year European-funded initiative with a consortium of 10 partners in 7 countries.

This project has received funding from the European Commission under the H2020-DT-ICT-03-2020 call under Grant Agreement number 101006203.