Artist-designer Garnet Hertz, designer-strategist Heinrich Eisele, psychologist-artist Philippe Bertrand and media-theorist Kristoffer Gansing were invited to Drive Volkswagen Forum in Berlin to discuss the advantages and challenges (the barriers and connections, where one finds common language and what the mutual expectations are) of collaborations between sciences, technology and the arts in the first STARTS Talks in Berlin.

Hertz’s Cockroach controlled mobile robot is an absurd and useless, yet quite sophisticated piece of engineering, where an insect that loves to move to the dark, is guided by light signals and moves the robot by walking a big tracking ball. Though this navigation system will never be 'used', quite some skills and understanding of robotics were applied to make it. 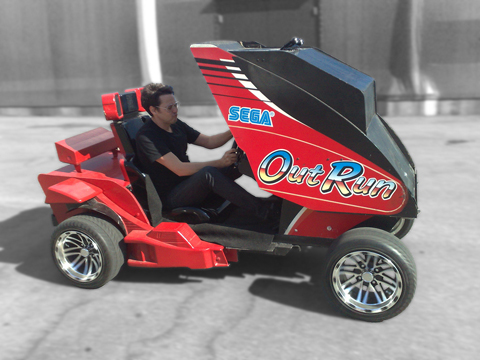 For his other work, Outrun, Hertz combined an arcade race game engine and casing that is worked into a vehicle that the driver operates only by looking at the arcade racer game screen. Further vision is blocked, but substituted by visual car sensors that try to see and recognise a road that is translated to the animation screen inside the vehicle. Very humorous to see presented in Drive Volkswagen Forum.

The Disobedient Electronics project is a series of publications that brings together examples and approaches of transversal practices of artists, designers, engineers, hackers that work with technology from a more critical and activist point of view. The areal photography rocket of Bureau of Inverse Technologies that produces images of protesting crowds is an example. Where official estimates the numbers of individuals of such crowds are most often rather low and the estimates of the protesters themselves often exaggerated, the rocket can prove the right numbers. Another example is the Autonomy Cube by Trevor Paglen and Jacob Appelbaum, a router over which all Tor browser traffic runs protected by the autonomous space of an art museum.

Hertz’s call for Critical Making, for making engineering practices of critique, is to large extend aimed at politics in American Maker culture that tend to present maker culture as, among others, a solution against poverty and loss of jobs to China.

Phillip Bertrand of BeAnotherLab represents the group of artists, scientists and designers behind one of the STARTS Prize Honorary Mentions.

BeAnotherLab spans the globe by having members in Sao Paulo, New York, Paris and Berlin and working in environments like refugee camps in the Middle East, Brazilian urban slums, scientific conferences and United Nations headquarters.

BeAnotherLab became known for its body and gender-swap-virtual-reality machine wherein one can experience the body of another. A double virtual reality audio visual headset where what you see is swapped with the vision of the other creates the intense illusion that you are in someone else’s body, having another sex, another colour, another form, another behaviour, another culture, another fate. The last is for which they were awarded a honorary mention by the STARTS Prize jury: to create the illusion that you are in the place of another person living under less fortunate circumstances in slum, refugee camps, having lost a loved one due to violence or other. A library of circumstances where the other may have to live with, the other that for that matter can as well be us: Library of Ourselves.

Two opposite questions came to my mind listening to Bertrand’s story. Do we have to isolate and disconnect ourselves using virtual reality technology in order to make contact and communicate with the other? On the other hand if VR can help breed empathy between us and understand the other, can we find investors a.s.a.p. for Bertrand and his team? I would have appreciated to learn more in his presentation about the science of empathy behind the work of the group.

After the presentations of Hertz and Bertrand, Marleen Stikker, moderator of the STARTS Talks, invited Heinrich Eisele designer and strategist of the Future Center Europe of Volkswagen Group and Kristoffer Gansing, director of transmediale to join the discussion about STARTS collaborations.

With the spectrum of voices at the table ranging from thought to engineering and from art to industry, it was interesting to listen to where approaches seemed to converge, where languages sound alike and where there are still distances to cover.

Where one can in these debates often hear that artists can also make prototypes, Heinrich Eisele expressed that from the industry there is more the interest to work with artists for their ability to narrate. Apparently, there is this need for narrating authenticity to understand how new technologies and products get societal acceptance and consumer appreciation. There was quite some discussion about how engineers of new technologies start to love their ‘techno-babies’ and therefore not always see unwanted effects of their technologies. Artists can help raise critical questions about how to make technologies more humane and inclusive, by narrating the scenarios of those technologies before these technologies are implemented. Looking back at Hertz’s presentation one might see Disobedient Electronics, but also the ‘bricolage’ VR of BeAnotherLab as creative alternative narrations of technology.

Another such alternative narration and critical ability of arts offering new reflection on our technological future, is looking at transversal spaces as Kristoffer Gansing calls them, spaces where we see technologies clash with users, or where we see power structures keeping citizens and societies away from more sustainable technologies, where we can see at least incremental steps towards systemic change should happen. But also where the power of markets has produced more fiction and speculation than artistic fiction and speculation can lead us to. Gansing questioned whether artists are capable of making the image there, making an image of change that is stronger than the fictions markets and its advertisement industries create.

It was a debate with a lot of liveliness and willingness to understand each other. Hearing from VW designer Heinrich Eisele that his department is lead more and more by problem-oriented design strategy than by solution-oriented design; hearing from Phillip Bertrand how many scientists show interest in their mediated empathy research technology; hearing from Kristoffer Gansing that we should look more in those transversal spaces and from Garnet Hertz how much there is to learn from an engineering that questions itself.

Marleen Stikker ended by asking all four participants for an advice what we should think about when arts, science, technology and industry collaborate.

How to establish environmental commons